We all want to get away. We all deserve to get away. We should all go away - to Narragansett and the Blueberry Cove Inn of course - soon.  As an innkeeper I feel that it is my duty to help you get away by offering a June discount. June is a lovely month and you really should experience a break by the sea before the crowds come down next month. Or golf. Or fish. Or shop. Or indulge in history. There is something for everyone to do.

Book one night, Sunday through Thursday, and get the second night half price. You must book on-line and mention the special in the "Special Requests" box on the reservation form. (The automatic computer generated confirmation won't show the discount. When I process it I will send you a new confirmation that reflects the discount.)

Unfortunately I can't accept third party gift certificates for this offer. And it will end June 27, 2013.

So what are you waiting for? Tell your boss you need two personal days and book now!

Discount on Walking Tour of Newport

One of the fun things about Narragansett is its location. Although most people hear "Narragansett" and think:

Really they should also be thinking

4) In the center of everything.

Yes, Narragansett is on a great ocean-facing piece of land and it has lovely beaches and weddings. But it is also within a 15 to 30 minute drive to many other destinations. One of the most popular is Newport.

Lots of people run over there to shop, tour the mansions, experience the nightlife and explore the bird sanctuary. Others revel in the history. Well, this deal is for the latter. 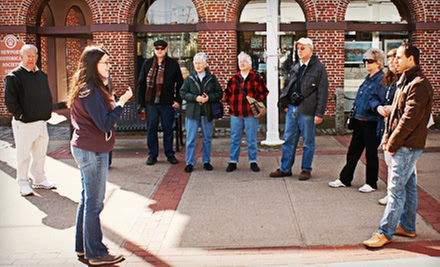 Groupon has a discount for two historic walking tours produced by the Newport Historical Society and the Newport Restoration Foundation. To quote the deal, "Walking tours explore the history of colonial Newport and Newport during the Golden Age."

So, if you are into history, walking or just doing something different AND like a bargain, check out this offer.

Note: no one at Groupon, the Historical Society or Restoration Foundation knows who the heck I am so I'm not getting any kickbacks for sharing.
Posted by Innkeeper Seely at 1:58 PM

How did you do that?

Sometimes guests ask me how I learned to do most of the construction and maintenance jobs that I have tackled. (Or have been too foolish/poor/stupid/stubborn to hire out.) Back in the olden days I watched "This Old House" when the homeowners actually did a lot of the construction themselves. It didn't seem that hard. Then I found books that spoke in a language that I could understand. Trial and error contributed greatly to my knowledge base. My brother-in-law taught me to sweat copper pipes. 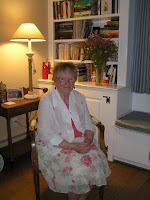 But it was my mother's can do attitude that really shaped me. She taught me the basics that a girl would need in the areas of cooking, cleaning, sewing, handicrafts and gardening. She encouraged me to have curiosity and to think out of the box in problem solving.  In some leap of enlightenment I began to just translate traditional                       "girl's jobs" into construction terms.


When you have an odd shaped house that needs new wall board just fall back on "girl skills." Cutting the wall board is just like cutting a fabric pattern. Screwing it to the wall is just like pinning a dress together. Mudding the seams is just like icing a cake. (Not my best skill but it gets done.)

So when there is a hole in the icing because you cut the opening for the electrical box wrong, get out the icing piping bag and get to work. First make sure the electricity is turned off. Mix a bit of plaster of Paris a little on the damp side - sort of between the texture of Greek yogurt and set pudding. Use either a cake piping bag or heavy plastic bag with the corner cut off. Don't bother using a cake decorating tip. Roll up the bag and gently squeeze the plaster into the openings outside of the metal box to fill the hole.

This technique was tidier than filling the areas with a putty knife. It allowed me to put a thicker bead of plaster evenly into the space.  The tip of the bag squirted the plaster behind the metal "ears" of the box and self-leveled so there weren't any annoying air gaps.


I'm sure a professional plasterer would roll his eyes at these instructions but they sure Worked for Me on Wednesdays.

Happy Mother's Day Mom. Thanks for all you taught me.

Posted by Innkeeper Seely at 12:00 AM

Pin It Email ThisBlogThis!Share to TwitterShare to Facebook
Labels: Monday Memories, Works for me Wednesdays

When you enter business you are always told never to discuss sex, religion or politics with the clients. Well, I guess I am breaking the rules today because I want to celebrate Rhode Island's decision to accept love as the standard for marriage and to pass a marriage equality
bill that was signed into the State's laws yesterday afternoon.


I have long been a believer in equal rights and tolerance. I live in a state that was founded on freedom of religion when Roger Williams was booted out of Massachusetts for not being a good Puritan.  We have the oldest synagogue in the country just across the bridge in Newport. And now we allow every human being to marry the human being of his or her choice. How great is that???

Obviously this is a contentious issue and not everyone thinks it is great. But here at Blueberry Cove Inn, I want to celebrate everyone's happiness.  I want to embrace new families from every walk of life. I want to be dizzy from dancing, tipsy from the champagne toasts and sneezing from all the wedding flowers.


So to everyone, even if you don't get married here, have a blast at your wedding. To all, straight and gay and lesbian, celebrate your way and have a happy life together.
Posted by Innkeeper Seely at 4:59 PM