Christmas in Narragansett is always unique. This year we had a pack of special guests spend Christmas at Blueberry Cove Inn. The Sheehy family decided to hold a holiday reunion here. Four humans made the drive up from Delaware, bringing four Burmese Mountain dogs and one brindled pal of unknown ancestry with them. These were beautiful animals, large enough to fill in for sleigh duty if Dancer or Prancer was feeling under the weather on Christmas Eve. 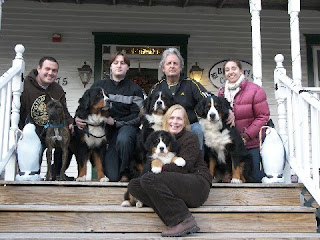 I must admit I had some trepidation about having so many animals on the property, especially when I learned that they were bringing a puppy along. What I was overlooking was the fact that these are show dogs, and thus well-trained to be on their best behavior even when traveling to strange places for the first time. If it wasn't for the occasional howl from the run in the backyard when they were outside, I wouldn't even have known they were around. And none of the other guests had any problems with their furry neighbors. Because the pet-friendly suite has a separate entrance from the rest of the property the anmals never had to cross paths with the other guests. 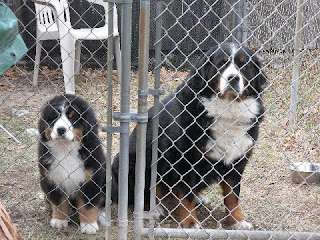 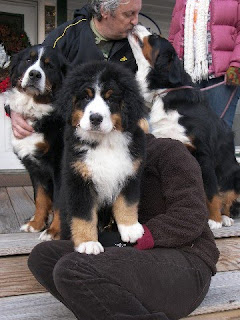 The puppy, named Ranger, had perhaps the softest fur I have ever petted and was as playful and friendly as could be. In fact the main problem with having him visit was that Seely's "I want a puppy" gene was activated. I wouldn't be at all surprsied if she cut a deal for a reduced rate on a future stay in return for a chance to pick a puppy from the next litter that's not quite up to showdog standards.