Here at the Cove we enjoy co-existing with our wildlife. We have half a dozen bird feeders scattered around the inn, chipmunks that like to play on our water slide, a goldfish pond and rabbits that come out to feed at dusk. But there is one element of nature we could definitely use less of: Squirrels.

Unlike our feathered and scaly friends, who hide if humans get too close to their turf, the squirrels will hop right up on the porch if you're sitting on the glider and come over to your feet to see if you dropped any food. They have chewed through the 3/4 inch plastic lids on our trash cans to get at fast food wrappers left by guests who have spent the day on the road to get here.

But by far the worst offense committed by the bushy-tailed rodents is the theft of food from our bird feeders. They hang upside down from overhanging limbs to defeat counterweights designed to throw them off the feeders, and shinny up the narrow, smooth poles that retailers market as squirrel-proof.

My various attempts to thwart them throughout the years have proved laughably ineffective. The plastic dish we placed over the suet feeder? They tag team it. One climbs to the top of the pole and tips it far enough so that his buddy can rake the suet out on the ground for a picnic feast. A few years ago I purchased a pellet gun on Craig's List. It shoots round plastic projectiles about the size of a BB that don't actually hurt the thieving rodent, but sting enough (I had hoped) to send him looking for a less annoying food source. Of course they flee when hit (the smart ones evacuate when they hear the creak of the door opening), but they're back in 10 minutes.

Frustrated in the extreme, I had declared a truce. Under the terms, the furry miscreants could feed at will on any seed that spilled on the ground, but if they actually got on the feeder or were stealing seed out of it, they got pelleted. However last week there was a violation of the demilitarized zone that called for stronger measures.

The feeder on the side porch has a spring-loaded lid. When you put it in on, you hold down a button on the front. When it is in aligned you release the button and a catch inside the feeder clicks into place. To open it, you have to punch the button before lifting. In between cooking breakfast courses last Wednesday, I looked out and saw that not only had a despicably clever squirrel figured out the catch, but he had climbed throught the hole in the top of the feeder and was literally bathing in seed. 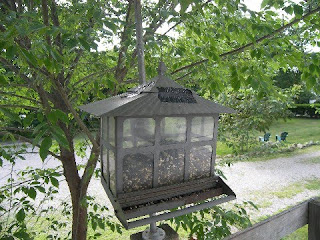 After running through my full vocabulary of expletives (it takes about 2.5 minutes), I vowed to make sure I never had to watch that nauseating spectacle again. I grabbed a roll of the handyman's secret weapon (duct tape) and hermetically sealed the top of the feeder. I've sent Christmas presents to Tucson that weren't wrapped as tightly as I battened down that hatch. It's been six days and I have detected no breaches of seed security.

Of course it now takes 12 minutes to refill the feeder because you have to strip off the tape, lift the lid, pour in the seed and then reseal the container with fresh tape. But that's a small price to pay for victory in this particular skirmish. For those of you keeping score, it's now Humans 1, Squirrels 312.

Posted by Innkeeper Seely at 11:00 AM