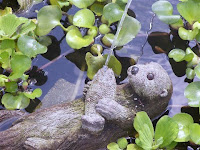 After breakfast on the other morning, Seely went out to feed the birds, only to discover that one of our most cherished adornments had met a ghastly fate.

Alfie the Otter has been a part of our daily lives for more than 12 years at two different residences, in Texas and Rhode Island. The fired-clay, lifelike sea creature hung out in our garden in Houston and for the past three years has served his natural function as a water circulator in our goldfish pond.

It was somehow quite soothing to see Alfie lying on his back in the pond with the curling stream of water shooting out of the mouth of the little fish he clutched to his chest. Our feathered visitors loved to perch on him while waiting their turn at the feeders. 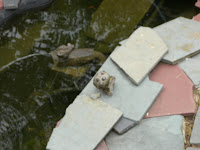 But on Saturday morning, we noticed that Alfie had been beheaded, his whiskered face submerged in the water several feet from his torso. Our first thought was terrorists, but after a closer examination, foul play seemed unlikely.

We concluded that after spending the last few winters trapped in ice, Alfie probably developed some cracks along the neckline. We're guessing that one of the larger visitors to our network of feeders (I'm choosing to blame the grackles) landed on Alfie's head with just the right ratio of weight/descent velocity and became the bird that broke the otters neck.

But even in distress, Alfie is still doing his job. His headless body continues to pump the water and the birds don't seem to mind his missing noggin. Maybe we should change his name to Ichabod.